In Memorial of Dr. Jack Gibson 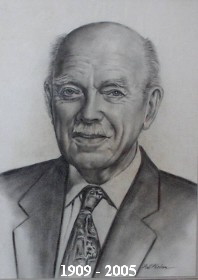 April 2nd 2005 – Dr. Jack Gibson, of St. David's Castle, Naas, Co. Kildare, Ireland, peacefully passed away at Naas Hospital, where he was once County Surgeon. In his 96th. year, Dr. Jack, predeceased by his loving wife Elizabeth and daughter Rosemary; deeply missed by his grandchildren Tamsin and Jason, son-in-law Andrew, relatives, long serving Patrick and Pauline, colleagues, friends and patients, some of whom he was treating until the end of his remarkable life.

“Let us be contented with what has happened to us, and thankful for all we have been spared. Let us accept the natural order in which we move. Let us reconcile ourselves to the mysterious rhythm of our destinies such as they must be in this world of space and time. Let us treasure our joys, but not bewail our sorrows, this glory of light cannot exist without its shadows, life is a whole and good and ill must be accepted together. The journey is enjoyable and well worth making.”

In Memorial of Ormond McGill 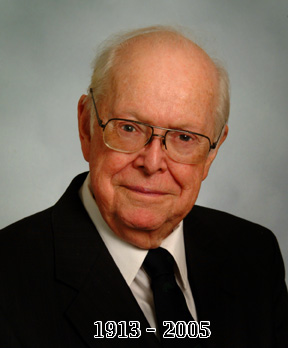 The Legendary Ormond McGill, known world-wide as The Dean of American Hypnotists, was born in Palo Alto, California on June 15, 1913, where he lived until his death on October 19, 2005 at the age of 92.

Actively involved in the field of hypnotism since 1927, McGill received international acclaim for his innovative books, pioneering the integration of hypnotism, meditation and creative hypnotic strategies. In all, he published over twenty-five books, several of which are considered classics in the field. He was honored by numerous organizations, including the American Council of Hypnotist Examiners, The National Guild of Hypnotists, the Hypnotherapy Training Institute, and the Society of American Magicians

Ormond McGill was a magician and hypnotist of international acclaim, and toured many parts of the world with his exciting stage shows. He was one of the first stage hypnotists to perform on radio and television, including appearances on the popular Art Linkletter TV show. After the passing of his wife, Delight Olmstead McGill, in 1976 he continued to tour, presenting his "Concerts of Hypnotism."

In addition to his work in stage hypnotism, McGill was an active faculty member of the Hypnotherapy Training Institute in Corte Madera, training hypnotherapists since 1981. He taught his last class for a group of advanced students just four days before his passing.

Ormond McGill was also a prominent naturalist and made well-known contributions in the fields of entomology and conchology. He was a true collector with a great variety of interests.

Of all his contributions, the wealth of his teachings will stay with us forever. They came out of his profound mastery of many hypnotic techniques, his deep personal understanding of Eastern systems of meditation, mysticism, wisdom and healing, and his creativity, vision, compassion, humor and life experience.

In recent years, Ormond McGill has been able to stay independent, largely through the loving care of his dear friend and colleague, Marleen Mulder, Director of the Hypnotherapy Training Institute. He is survived by his four nephews and their children from the Olmstead family of Palo Alto, as well as by thousands of grateful students and colleagues and a wonderful circle of friends.
© Copyright Martin Kiely Hypnosis Centre, St. Luke's Cross, Cork, Ireland. Tel: 021-4870870. All Rights Reserved.